NOZOMI Doha and their team have been recognised for their outstanding quality in contemporary Japanese cuisine and their unique dining experience by globally established award bodies. The restaurant has won multiple awards and gained several more special mentions since they opened their doors in September 2015. We’ve chosen some of our favourites here: 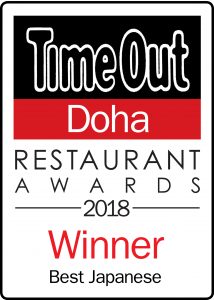 Winners: Restaurant of The Year 2017

Nozomi is pleased to share Nozomi Doha has been announced as a top 10 finalist under Restaurant of the Year Doha in the 2015 BBC Good Food Middle East Awards.

We thank our guests and followers who made this possible.

Winners: Best Night On The Town in Saudi Arabia 2017

Awarded for Excellence in Quality

Over the 11 years that Nozomi has been established, they have been accorded with the  following awards, each one a testament to the success of the brand and the whole team.

Awarded to the Restaurant with the Best Bar in London

Awarded to Businesses and Brands that have made an Outstanding Contribution to the London Lifestyle.

London Restaurant of the Year 2013 Runners Up

London Bar of the Year 2013 Runners Up